A great deal of smart people blogged and spoke on podcasts about all the new features in OS X 10.7 aka Lion.

But there are two features that albeit not life-saving improve the quality of life quite considerably and have been at the forefront of Mac critique switcher pain since… well, OS X.

#1: Resize from Any Edge

Instead of just from the bottom right corner, you can now resize from any edge and any corner too: 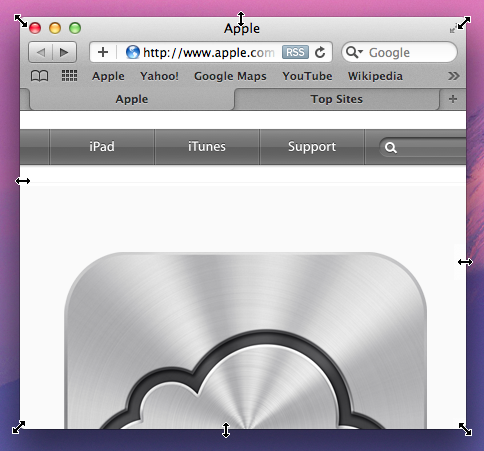 The small resize chevron in the bottom right corner is also gone and when combined with the disappearing scrollbars the effect is very pleasant. It’s as if windows have finally found their purpose: to display content, not widgets.

I don’t need to say more about this one. As an owner of a large LCD that
displays multiple windows at the same time, thank you! Thank you so unpossibly very much.

When you copy or move a folder and the target already contains a folder with the same name, the Finder gives you the option to either replace the target folder or cancel the operation:

Another way to think about it is to view folders being equivalent to files: if you were to move a file and if the target folder already contained a file with the same name, would you expect that the operating system merges the two files? #rationalization

It may make sense to geeks but to most people switching from other OS’s, where they have learned to click absently minded on a torrent of badly worded and poorly button-ed dialogs, this was not just merely annoying but down-right harmful. You learn fast though, as the saying goes.

Lion changes this behavior and offers to merge the folder rather than replace its content:

I like the Keep Both button because merge is such a geeky word, but on the other hand I could argue that perhaps both is more ambiguous since according to the dictionary:

both |bōθ|
adjective & pronoun
used to refer to two people or things, regarded and identified together

Using this definition one would expect that both folders would keep their identity, which is obviously not the case. Perhaps it’s just a matter of perspective and whether one sees “the thing” as being the folder’s content rather than folder itself.

Why Wait So Long?

This is the one question that’s been nagging me regarding these two changes, but I think I’ll let smarter people answer.

Apple could’ve done both a good while ago - as far as I can tell there’s nothing earth-shattering in Lion without which they couldn’t have introduced these features; after all the radars have been filed, and complaints have been voiced for quite a long time.

Or, perhaps, a more interesting question would be “what can we read/infer/speculate from this change?”

I cannot come up with anything that would tie the merge feature into their getting rid of the file system as we know if, and I’m even more puzzled by the resize feature because it seems counter-intuitive to me that Apple would spend time on a feature that’s been, aside from having the menu at the top and the window control buttons to the left, a seemingly core visual feature that people identified with OS X (and complained bitterly about).

One more for the road:

If anything, a 256-color terminal means vim can look as good in the console as MacVim looks.

The screenshot above shows the new terminal theme called “Silver Aerogel”. Can’t say I’m crazy about it. Black text on gray doesn’t offer a very good contrast, but the blur on the window makes it stand out.