When we could control the source of data, we’ve reverted back to some server-side framework producing the UI code, and we worked hard to make that combination good, just like we worked hard before to make integrating web services easy.

Why a New Way?

What we have right now - with Rails, and Django, and ASP.NET MVC, and PHP, and you name it - is better that everything we ever had before, but there are a few things that irk me about the current state of affairs:

As web developers we cringe at the thought of putting markup in the database, or having stored procedures generate HTML, but we have no problems with code generating HTML. I’m not saying it’s hypocrisy, but it’s the first word that comes to mind.

If you’re a desktop developer, imagine your services spewing UI controls instead of just typical web service XML. Imagine your UIToolbar, NSButton, ContextMenuStrip, or your GridBagLayout being the result of a web service call; I don’t mean a UI control that you create in your UI layer based on a web service call, but an actual object that you only deserialize and put on screen at (x,y). I get a shiver just writing this, but in the world of web apps it’s something perfectly natural.

Why? Because we have a good templating language? Because we’ve always done it this way? Because everything comes from a server anyway?

Between mash-ups and web services, we’ve already solved a great deal of those issue. We just need to apply them rigorously and consistently.

I propose that we build the app UI using static HTML (as in not produced by other code) and that we use only JSON to exchange business data, by means of the four HTTP verbs (GET,POST,PUT,DELETE), essentially turning your Rails/Django/ASP.NET MVC/PHP app into a lean-mean JSON producing/consuming machine.

Loading the UI for displaying or editing an entity would take the following steps: 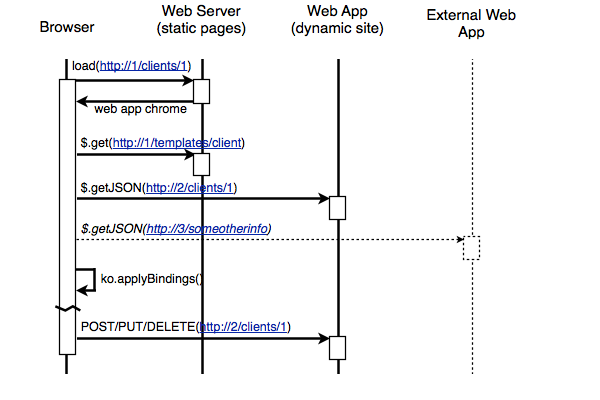 This latter formula allows us to focus on the details of what differs between various entity displays and maintain the same layout.

On top of that:

Between libraries like jQuery and Knockout.JS (or Backbone.JS) we already have all the tools to make it happen. Chances are you already use them with your app - why not go all the way.

Notice that I was careful not to say the app is RESTful - that’s because my proposal doesn’t address the fourth guiding principle of Fielding’s cannon. That’s something for you to decide (and I think you should do it).

Here’s a simple example, using Knockout.JS, to see what I’m talking about: http://github.com/philipmat/webmvc/.